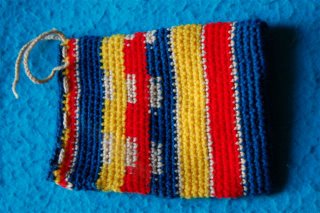 Good old Louisa Calder came in handy again for this bag I made for my niece. It's a lot smaller than the laptop case I made, but is pretty much the same sort of thing. I still hadn't twigged about the row of trebles, though, so it's threaded through the stitches as per last time. I really like this bag, but I actually meant it to be horribly garish again to annoy my niece (isn't that what Aunts are for?) after she mocked my laptop bag. I was tempted not to give it to her, in fact, but since I'd left it too late to get her something she might actually like for her birthday, I had no choice but to give it to her. I stuck in a load of Burt's Bees products to soften the blow of the ugly present. And gave her a new mobile as well, so maybe I should have kept the bag after all...

Those with a keen eye and a rapier wit will note that I've quite clearly missed a few stitches along the way. I'm still not quite capable of making something without mistakes. Even somethings as simple as a rectangle, double crochet bag.
crochet bag

The lovely Katy from Alpaca Farm Girl contacted me to ask if I'd talk about the fine art of crochet for her Fiber Arts Friday feature. How could I refuse? I am but flesh and blood. You can read my hilarious insights and homespun wisdom right here . Also, I know it's shameful of me, but I gave Katy the scoop on two things I finished making recently: my crochet blanket (well I say "finished" - I've still got a row of edging to do) and my amigurumi Milo, which I made for my Milo-mad niece over in Australia. She's already picked a hole in the back of his neck, which I think speaks volumes about the ingratitude of 2 year olds.

Yes, I really did crochet myself a laptop bag. Thing is, the laptop is teeny tiny - about A5 size - and so no normal laptop case was going to cut it. I made it while sat in hospital waiting for Al's Gran to recover after her op went horribly wrong (thankfully she's on the road to recovery now) and it helped to keep me busy and gave me something else to think about that wasn't too taxing. The pattern is based on one from this fantastic old book called " Louisa Calder's Creative Crochet ", which is full of loads of garish designs - just the sort of thing I love. She's obviously a true English eccentric, and the ghostwriter is at pains to point out that she comes from an artistic environment and that her husband, Alexander Calder , was "one of the greatest sculpters of all time". Quite what he had to do with it is a mystery to me, but this was published back in 1979, so maybe including your husband's bio in your own book was less strange back

I've been wanting to post this since the weekend, which is when I actually finished the thing. But for various reasons to dull to go into, I haven't been able to until now. I'm feeling rather pleased with myself over this one, and only wish that it was made from some spangly fancy thread rather than a basic acrylic. You could also level the complaint at it that it's on the small side - certainly it's not as big as the original pattern - but I actually really like it this size, and it's slightly larger than it looks in these shots (honest guv!). All in all, I'm pretty proud that I managed to make an item of clothing - and an item of clothing that I'm really happy to wear, no less! This time it all came out even till I got to the end of the second arm and ran out of stitches at the end. I decided either I'd cocked up somewhere way back at the start, or the pattern was telling my to count forward too many stitches. After unravelling it a good way back